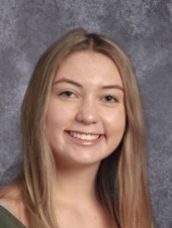 Blanchet senior Brooklyn Buchheit attended the National Youth Leadership Forum for Law & CSI over the summer.  In her own words, she shares her experience.

My NYLF Experience by Brookly Buchheit, Class of 2022

This summer I was fortunate enough to participate in an experience of a lifetime. At the beginning of 2020, I was formally invited to participate in Envision’s National Youth Leadership Forum for Law & CSI. I had seen that former Cavaliers had participated in different branches of the program and I reached out to them to see if they thought the program was really worth it.  After lots of researching and planning, I decided to enroll for this program.

In the months leading up to the program, I worked hard to earn money towards the program. There were also some pre-program assignments I had to complete in order to be prepared when I arrived. With COVID and all of the restrictions around the virus, I was anticipating many of the attractions and experiences to be closed or unavailable. However, the teams putting together this amazing program made sure the scholars received the most fulfilling experience.

This was my first time travelling somewhere far away on my own, let alone across the country. I had a layover both ways as well. I took this as an opportunity to see for myself if I could travel and live on my own somewhere distant, as I prepare for college. I had to rely on myself alone and continue my punctuality and responsibility as I was on my own. This was one of the most beneficial ways of proving to myself that I have the ability to go wherever is fit for me, no matter how far.

Once I arrived at the program, I found that all the other kids who had travelled to the program were just as nervous as me. This was comforting considering that I was in a room with 350 other scholars in the same boat as I was. It was eye-opening to be in a room multiple times a day with a group of scholars, the same size as my school, who are all interested in having a future in law or CSI. These scholars came from all over the world, making being from Oregon feel foreign, but also right at home.

I was placed in the Holmes group, named after Oliver Wendell Holmes Jr., a Harvard law graduate and Civil War veteran who advocated judicial restraint and developed the concept of “clear and present danger”, as the only basis for curtailing freedom of speech. This was a group of 16 other law interested scholars who lived as far as California, New York, and Wyoming. My roommate was from Pittsburg, Pennsylvania. The Holmes group was my family for the week and I could not have asked for a better group to enjoy my D.C. experience with. We have kept in touch every day since we left the camp, no matter the time difference.

The first few days, we spent time in our small groups learning and talking about the courtroom and the rules and etiquette regarding it. We also received the opportunity of listening to renowned speakers such as Mr. John Douglas. Mr. Douglas is a retired special agent from the Behavior Analysis Unit, a criminal profiler who interviewed many criminals, including Charles Manson, Ted Bundy, and Robert Hansen. He has also written many books, such as Mindhunter and The Killer Across the Table, and has been confirmed to have been the inspiration behind the characters of Jason Gideon and David Rossi in the popular television series Criminal Minds. The Netflix Original series Mindhunter was picked up from Mr. Douglas’ book as well. Another speaker was Marvin Anderson of the Innocence Project. Anderson was wrongfully convicted of many crimes with a sentence of 210 years. After John Otis Lincoln came forward to identify him as the actual assailant, the judge still refused to exonerate the conviction. Mr. Anderson served 15 years in prison and 4 years fighting parole until his innocence was finally proven. As Chief of Hanover, Virginia Fire Department, Anderson also works on the board of the Innocence Project to help those wrongfully convicted of crimes.

Along with those amazing speakers, I was able to participate in a simulated Supreme Court Trial, and a criminal mock trial as well. These are experiences I had never participated in before this program and I found how beneficial they were to increasing my understanding of the American government. I learned how to be on the prosecuting side for both of these cases. I especially enjoyed the rebuttal I was able to take part in regarding the evidence we obtained and the defendant’s arguments. I was especially fascinated by the Supreme Court Trial simulation. I enjoyed having to fight for my “client’s” rights regarding the constitutional amendments and different Acts in the Constitution. The Mock Trial taught me to stay on my toes considering the evidence and the expert witnesses were not announced until the night before.

The Envision program also included a tour of many of the monuments in Washington D.C. I was able to visit the Lincoln Memorial, Korean Memorial, Capital Building, Reflection Pool, and the Smithsonian Castle. As an American, you always see pictures of these buildings but it is incredible to be able to physically visit them. It is a goal of mine to be able to go back to Washington D.C. and visit the rest of the monuments and the museums.

This program was the most incredible experience I could have asked for. I now have friends from all over the country. I have experiences to share with my friends and family.  I have the ability to confirm what I want to do in college and as a career. The Envision program has given me the opportunity to learn more about my interests and encourages me to be a leader in my community through the strengths that I have created. If you were to ask me if I think the National Youth Leadership Forum was worth the expense, I would tell you to absolutely go. You not only create amazing experiences for yourself, but you make amazing friends and get the ability to show who you are and what you are interested in.